A lesson in persistence

Last January, I entered the ING New York City marathon with a guaranteed entry. I had always promised myself that I would run the NYC 26.2 on the caveat that I had to qualify...no lottery! I had previously met the qualifying time but for one reason or another let it lapse, so when I met the standard in Arizona last January, I bucked up and entered NYC.

Of course, I had no idea that my training for the marathon would involve 2 x Ironman in the preceding 10 weeks and a mere 2 weeks of *training* for the marathon. In the days leading in to the race I had a pretty good idea that my performance would be somewhat less than optimal. I had no leg speed, no long pace runs and definitely was a little more than exhausted...of course that did not stop me from trying!

There were nearly 45,000 entrants to the race, organized in a very complicated system of bib colors, corrals and wave starts. We left downtown Manhattan at 5:15am to catch our coach (note BAA, I said COACH, not yellow school bus!) out to Staten Island. The first wave start was at 9:40am, so we had over four hours of time to kill in the makeshift village..and it was COLD!! The potties were plentiful, lots of hot coffee and because we arrived so early, we had no issue finding a somewhat warmer spot under a tent to sit and relax. As the crowds kept piling of the buses and piling into the start areas, it really made me appreciate how huge an event the race was. The biggest races I had participated in previously were Boston and the Nike Women's, each in the low 20,000's. NYC is just absolute semi-controlled chaos.

We were permitted into the "start" corrals at 8:10, and I was relieved (no pun intended) to discover that there were potties in the corrals. Unlike Boston, in New York you spend a long, long time in the corral. At about 9:00 we started to move forward to the the start on the Verrazano Narrows bridge. I had drawn short straw and was in the starting corral UNDER the bridge. So you know that dramatic start that you see in all the publications with the masses coming across the bridge? Missed that. I got to be a troll under the bridge instead...and the start was decidedly less than epic.

We didn't even really know that the gun had gone off except for the surge and I was surprised to find that the corrals had actually been smashed together such that I was really only about 100m back of the start line. It was the most anti-climactic start I have ever experienced. Being mashed in the corral had also unknowingly protected me from the elements. As soon as the crowd dispersed, we were hit by a huge wash of cold air and brutal cross wind under the bridge. It was awful under that bridge - no view, no GPS signal, very windy and very cold. Coming off the lower bridge deck, my lungs were burning and I felt as though I had just finished a sprint on a dry, cold winter day. Not a good feeling.

Since my GPS had conked out under the bridge deck, I also had no idea what my pace was or how far we had gone. Watch said 6km and 20 minutes elapsed...obviously I was not running 3:30 kilometres so something was amiss. My HR was also brutally high - 184 across the bridge, so I deliberately slowed down. At the 5km mark my watch said 23 minutes so I was on track for what I would normally pace an open marathon at. The question was...how long could I hold that pace given my sub-optimal training? 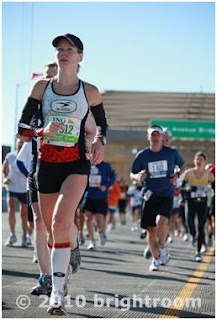 The race through Brooklyn was incredibly congested and chaotic, and a total spectacle. The cheering crowds, however, were plentiful and enthusiastic...in fact, other than over the Verrazano, I don't think there were any gaps in the spectators at all. The sun was out and it was a glorious day to cheer on a race. As I ran through the boroughs, I recalled the Fred Lebow movie "Run For Your Life" and really appreciated the storied history of the race.

The answer to the question of how long the legs would hold out came swiftly as we entered Manhattan on the Queensborough Bridge. Just past the halfway mark, we crossed a small bridge that was rather heartbreaking despite its short distance. My legs started informing me that they were not happy with the expectations being placed on them, and I knew it was just a matter of time. Brain said yes, legs said hell no. By the time I reached the Queensborough at 16 miles (25k) with its steady climb, I was done. Hips started cramping, knees ached, quads hated me, general fatigue threatened.

My legs loosened up a bit on the off-ramp into Manhattan and I was somewhat hopeful that I would bounce back, but just as the exit jackknifed to the left to spill us out onto 1st Avenue the runner directly in front of me stopped dead in his tracks with a leg cramp. Like an idiot, I smacked right into the back of him with nowhere to go. My left hamstring pulled and froze, and then both legs completely cramped up with the sudden stop. Another runner behind stopped for me to ensure that I could keep going (I was quite appreciative of him), but this was the final straw for my legs. Their contempt for me was complete.

As we ran up 1st Avenue, the blocks were ticking away and it was mentally difficult to see the street numbers - I was on 60th and knew I needed to go to 127th before I crossed into the Bronx. Then I would need to descend back down to 57th to enter the Central Park finish line and THEN go back up again. It felt like a long, long way. At this point, I had slowed considerably and neither my head nor my legs were really in the race anymore. My 1:40 first half now was impossible to match and I would be lucky to finish under 3:40.

It's funny that after doing two Ironmans that running an open marathon would be such a mental challenge, but it was. I was drained and fatigued and just ready for the race to be over. I'm not sure I have ever really checked out of a race like that, but I know for sure that it makes it so much harder to persevere once you stop caring. And when I reached Harlem, I am almost ashamed to admit that I did the unthinkable. I stopped. I sat down on the curb. And I just sat there.

It was the closest I have ever come to DNF'ing. Realizing eventually that it was ridiculous to DNF a race with less than 8k to go, I got up after a couple minutes and just started running again. During the time that I had sat on the curb, the group of runners had swelled and I knew that my little *time-out* had cost me. And at that point, it really bothered me. I resolved not to walk or stop again, apart from briefly at the next aid stations to get some fluid down. 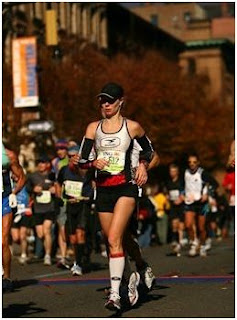 Halfway down 5th Avenue, we turned into Central Park for the final section of the race. This was my favorite part and not just because I was almost done! It was like a breath of fresh air - the road through Central Park was undulating and full of shockingly beautiful trees with their multi-colored fall leaves. The rest of the race had been so urban, industrial and gritty..so very New York. The contrast of the park was a total relief, to be back in some semblance of nature. Aaaaaah.

I realized at the 25 mile mark that what seemed like one in every three runners was walking. It was nuts. I was so disappointed in myself and so determined to salvage a 3:40 that there was no damned way I was walking. Forget the legs. No. More. Walking.

And then it was over. *Bliss* 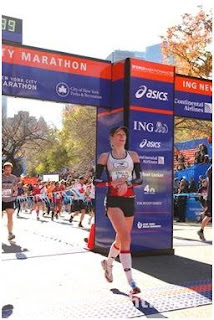 Happy was short-lived until I realized I now had to hobble another damned mile to stand in line for dry clothes. I am not exaggerating. A frickin' mile. Normally my race report would stop at the finish line, but the crowded, ridiculous march to the baggage trucks deserves a mention. The bag trucks were lined up in REVERSE numerical order, thus the runners having started at the front with low bib numbers had to walk FOREVER to get their bags. Then, once you finally arrived at the baggage trucks, they were so ridiculously disorganized that there were line-ups for 45 minutes to an hour. Bad, bad, bad way to end what was otherwise a decently organized event.

The synopsis? It is a race worth running once in a lifetime, and I had a pretty good half all things considered. However, a marathon is not won until 26.2 miles have been traveled. Finish time was a yucky 3:36:36...not pretty, but I got what I deserved by letting the devil in my head trick me into thinking that I should quit.