One of the ongoing jokes amongst my training partners is that "training is not racing".  And we all know culprits who are guilty of this.  I'll even fess up that I've been guilty. (*shhhh* don't tell my coach!)

You know the ones.  It's the guys (or gals) that go out at 120% FTP from the get go on long rides, gassing themselves so badly that when time comes for the "work" part of the workout that they are hanging off the back and barely functional.

It's the runners that seem to misunderstand that a "conversational pace" means that, yes, you can actually hold a conversation.  Gasping for breath between words, for instance, is not a conversational pace.  And, unless you are pretty elite, I'm guessing that 4 minute kilometers are not your recovery run pace.

So you get the picture.  Yet, as much as I express amusement (and at times, dismay) over the exploits of these speedy souls, it's quite unfortunate that they don't get the point.  Dude, you didn't kick my a**....you kicked your own self square in the derriere!

A key attribute of a successful athlete is the ability to carry out a workout within the expectations of the workout. And, more often than not, those successful athletes are guided by incredible coaches who understand this concept.  The only way to "win" in training is to execute on plan.


My coaches - Bjoern and Dale - are athletes themselves and I trust them to guide me in the right direction. They have experience and knowledge that far surpasses mine, and they have spent years developing workouts designed for specific purposes. They know what the appropriate combination of work and rest is, and what mix of volume, intensity and technique will achieve the desired goal for the session, week, training block and season.  There is a greater purpose for each mile repeat or swim set than simply killing it....and I trust that when my coach tells me to do something, that he knows best.

My underlying expectation in all coached workouts, therefore, is that I will complete the workout as it was intended. Coaching, after all, is a science....and failing to follow the plan is usurping the entire process. Every well-designed workout has a goal - whether it be intensity, endurance, volume, technique - and it is achieving that goal on any given day that makes for an effective plan.

If the workout entails going all out with minimal rest until I have to be scraped off the track after, then that's what I do.  If I perform that session in any other manner (too fast, too slow, without attention), I understand that I am simply missing the point.  You learn to do the hard days hard, and the easy days easy (and, quite frankly, if you are doing Bjoern's hard workouts properly, you really learn to appreciate that rest!)

All aboard! The pain train rides again


I spent all of December and the better part of January in an ignorantly blissful state. Free from the Training Peaks schedule, free from obligation to put in hard workouts and, most notably, a good long break from the pain train.

Anyone accustomed to endurance training knows the pain train of which I speak (or the pain cave, or whatever you have nick-named it). It's that place you go to be enveloped by an overwhelming and raw sense of complete exhaustion. You get there only after you have dug as deep as you think you can go, and then you just keep digging.

At the beginning of February, I punched my ticket for another seasonal ride on the train. It starts innocently enough - the mileage, the intensity, the daily-doubles. Your body remembers it, and it initially responds quite eagerly, like a dog raring to go at the beach. You want me to run? Yeah yeah yeah, let's run. Intervals? Track? Awesome. Let's go! Now! Show me more!

The memories of past season successes are still fresh enough to motivate.  The dogged enthusiasm has returned.  The wobbly and bonky feeling of hard successive weeks of training last season so quickly forgotten. It is funny how short-term our memory is when it comes to pain.

Last weekend, after a scant three weeks back on the train, I participated in my first event (aka "this is not a race") for the year, the First Half Half Marathon. I knew with only a few weeks of somewhat serious training under my belt, including a long period away from running while recovering from some late season niggles (I don't use the i-word), that I would be a shadow of my former self. And, of course, I was.  Enthusiasm, even dogged enthusiasm, never trumps training.

It was mentally challenging to show up for a race knowing full well that I was not ready to race. Yet, it was a good kick in the pants. A year ago, I would have been thrilled to the moon with my result....and this year it was a terrible run for me in so many ways.  My nutrition was off, my pacing and endurance was scattered and I didn't feel mentally ready to put in the effort.

Notwithstanding my disappointment, there is something about putting on a race bib that forces you to do the work and face your shortcomings.  Last season is gone....and there is a lot of work to be done.

The week that followed the First Half was not the recovery week that one might anticipate following a half marathon, but rather, a potpourri of hard workouts.  I had so conveniently forgotten the dichotomy that is training - the feeling of being so completely, utterly shattered during a workout, yet somehow finding a way to pick up the pieces to do it all over again the very next day. For the last 7 days, my legs have screamed at me incessantly to quit and, in the way in which I have become accustomed, I've simply told them to shut the hell up.

The pain train is the unavoidable side effect of hard training.  There is no faking it.  It transcends "real life" - you momentarily forget about your obligations and your responsibilities and just focus on breaking down the workout assigned to you.  20 x 400's on the track. Threshold intervals on the bike. Those moments in zone 4 and zone 5 are at the same time the best and worst feeling in the world because nothing else matters but getting it done.

Today, after a hard week of workouts, I found myself in that recognizable place that is the pain train. Completely shattered, raging with hunger and almost euphoric. Or perhaps delirious?

The tiredness, the exhaustion....all so familiar.  And yet, I don't fight it because it's the way that this training stuff works. The one way ticket on the pain train is punched for the 2012 season. Let it ride!
Posted by richelef at 9:58 PM No comments:

I love you is not just for Valentine's Day.

With February 14th coming up I felt that love was a good subject for a blog post.  Not to worry, I'm not talking about roses and cupids and heart-shaped chocolate boxes and all that other commercial crap that we are subject to at this time of year.  Bah humbug!

Instead, in the spirit of heart day, I thought I would honor some people very close to my heart that I do not mention very often.   The content of my blog typically contains random ramblings as I try to balance my obsession/passion with triathlon with a full time career and the rest of "real" life.  The single biggest influence on my "real life"?  My family of course.

I am very fortunate to have grown up up with a family who are unconditionally supportive of me. Even when I failed at something, my mom or dad would hug me and tell me “I love you, kid”.  The unconditional support they provided gave me the strength to pick myself up, dust myself off and gave me the will succeed the next time.  Or the next time.   And when what I was up to just was not meant to be....that was ok too.

My parents accepted that I hated piano lessons.  They forgave me for bringing home every stray cat in the neighbourhood.  They suffered through my teenage-angst filled Depeche Mode years, and they fully well expected that I would crash my first car.  Which, of course, I did.  They even lovingly rolled their eyes when I told them I was signing up for something called Ironman ("....but you hate swimming!").

I called my mom in October to tell her that I had just run a 1:25 half-marathon, to which she replied, "is that good"?

They don't care if I run a 5 hour marathon or a 3 hour one.  If it makes me happy, then it makes them happy.

I know that regardless of whether I am ultimately successful at something or if I flounder while I figure it out, that my family will love me.  They don't say "I told you so".  Instead, they say "next time it will work out better."  Yet, that knowledge doesn't make me complacent.  It makes me more driven.

I have always recognized that the support of my family was a positive influence in my life, but until recently did not realize exactly how much power "I love you, kid" really has had.  I read an article recently on why parents should say I love you to their children.  You might snark that this is pretty obvious stuff....and it is....but it is also incredibly powerful.

So, to my mom, dad and sister....thank you for the unconditional love you have shown me.  It has made me more courageous, more driven and a better person than I could have ever been without.  I love you! 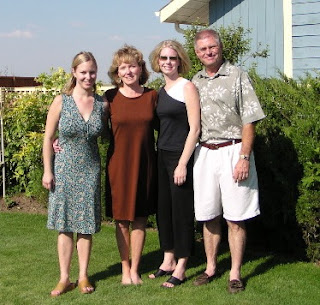