This week I met my fundraising goal for the 2011 Ride to Conquer Cancer!  Yay!!  With much thanks to some very generous friends and clients, I am now able to participate in the ride for the second year in a row and have raised over $5,700 during the last two years for the benefit of the BC Cancer Foundation.  But it is not time to sit back....there are still two more months until the ride and lots more fundraising to do!

This year, our corporate team has 33 members and has an aggregate fundraising goal of $133,500.  We've been busy planning fundraising events and getting our team ready for the two-day ride down to Redmond, WA.  We have ordered some awesome new custom ride Sugoi kits so our team will stand out on ride day (props to the folks at Speed Theory and the custom design team at Sugoi for helping in the process)!

What has been really inspiring about being involved with the corporate team is hearing the stories as to why people do the ride - hope, optimism, philanthropy and determination really do spring eternal to efforts like these.  The acts of fundraising and riding a bike for two days is nothing compared to the struggle to beat cancer, and in my mind, the very least we can do.  Cancer affects so many - it is a disease that strikes young and old alike, and every personal witness to it has a heartwrenching story to tell.

Survivors who participate in the ride can chose to ride with a flag on their bike and it was really astounding to look around the crowd of riders and see all the flags.  It was a testament not only to the power and conviction of the human spirit, but makes you feel grateful for every day you have to live.  Survivors are role models to us all, and those that have experienced loss are equivalently relentless in their determination to make a difference.

The reason I have chosen to support this particular charity is because I believe that they are also equally determined to make a difference.  The BC Cancer Centre is focused on advancing treatment and research, developing new therapies to save lives and very boldly seek a vision of a world free from cancer.  I'd like to believe that this is possible, for the sake of us all.

Although there are no more ride spots open for this year, if you have time to spare, you can get involved as part of the crew or by supporting one of the riders.  As for me....I think that with two months to spare, that perhaps I need to increase my fundraising goal!
Posted by richelef at 1:27 PM No comments:

On Sunday, a group of us journeyed over to the inappropriately named Sunshine Coast for their April Fool's Half marathon.  It was a very early morning, starting with a 5am wake up and journey to Horseshoe Bay to catch the ferry over.  Good thing Starbucks has an April special on grande cups of brewed coffee, because I needed it!
The ferry was a little late, so it was a bit of a scramble to take care of all the pre-race necessities and I was not able to get an adequate warm up.  I barely made it to the start by gun time!  I was not fussed, however, because this was really a "C" priority race for me.
The low priority also gave me the opportunity to experiment a little because I didn't really care about the outcome.  It was essentially a race pace training run and an opportunity to change a few variables, try out a nutrition plan and mess around with pacing.  I was not particularly rested and my diet was not very angelic in the days preceding the race, and two cups of pre-race coffee is totally uncharacteristic given my history of tummy troubles in races.  As it turns out, the experiment was a good one....but could have gone very wrong!
The start was moved this year so it was downhill and the pace was a little hot from the get go. After a couple of kilometres of a very fast pace, I settled into a pack of a few runners and found myself running alongside the venerable Rachel Kiers.  Rachel is an athlete whom I very much admire and respect - she is incredibly strong, a remarkable triathlete and is one of the most lovely and cheerful people I know. I knew I was probably out too fast if I was in the same group as Rachel, but I let it ride.  I felt good, the downhills were fun and I had nothing to lose, although she was probably tired of me sticking around! 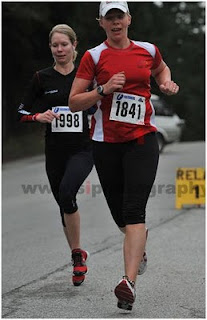 Checked my watch at 10k and realized that I was under my open 10k time by almost 2 minutes.  Again, shrugged it off and accepted that a blowup was imminent.  And yet, by the time the hilly section around 16k arrived, I realized that I could hang on for the finish.  The last half was not as fast as the first, with some challenging uphill and rolling sections, but it was a very fast course for me.  I usually struggle at the half marathon distance and for some reason, on Sunday, there was just no struggle.  The last three kilometers were rolling and downhill and at this point Rachel got away on me (she presumably had gas in the tank, and I did not), but I was too happy to care.
A week ago, if someone had told me I would break 1:30 on the half, I would have shrugged it off as an April Fool's joke indeed....but my finish time was 1:27:39 (no fooling!), a full four minute PB.  Reflecting on the race, it was really gutsy to go out so hard, but the gamble paid off.  I guess that's what C races are for....to play around with something and see how it turns out.  The 2 cups of coffee stayed put, the nutrition plan of a gel every 30 minutes seemed to be fine and for reasons unbenownst to me I was able to hold what was essentially my 8k pace for a full 21.2.  Hopefully I will figure out the "how" very soon because whatever it was, worked!
Posted by richelef at 6:24 PM No comments: