A year ago, I watched Ironman Kona unfold online from my hotel room in Victoria BC, the day before running the 2009 Victoria Marathon. At that time, I had exactly two triathlons under my belt (a sprint and an oly) and had the very daunting task ahead of me of training for Ironman Canada 2010.

Only in the wackiest of fantasies could I have imagined that in one year I would be toeing the line with 1800 of the world's best triathletes at the 2010 Ford Ironman World Championship.
Yet, it was somehow possible, and at 3:30am on Saturday October 9, 2010 I greeted the humid Kona dawn to begin what would be a very challenging and humbling day.

I was a bit less nervous than at IMC because I (kind of) understood what was about to unfold. With some mild reluctance, I accepted my fate for the day - it would be hot, it would be hard and it would hurt. Kona is known to be very challenging at the best of times, never mind when you are only six weeks out from your first Ironman. As such, my goal was simple - to finish by 8pm. I deliberately set expectations low because I wanted to enjoy the day as much as possible rather than fixating on a time goal. The key was to relish the fact that I was really in Kona at the Big Show. 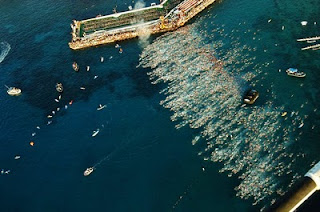 The open water swim in Kailua Bay brought with it all kinds of evil for a nervous swimmer like me. Not only are wetsuits banned, but the swim start was like nothing I have experienced - we had to tread water for 10 minutes before the gun went off! It was total, uncontrolled chaos. I tried as best I could to stay calm, but there was really no good spot to be in and it was hard to keep moving forward. The swells were nauseating and the current was maddening. I also swallowed more than my fair share of salt water! My time of 1:22 was pretty pathetic, but I am ecstatic just to have survived....after all, the prospect of a 3.8k ocean swim sans wetsuit is very terrifying to me.


Seeing the 1:22 on the clock as I exited, I had two opposing thoughts: thank goodness it was not 1:30, and damn, that is really, really slow. There were flashbacks to my first triathlon when I got back to transition and there were no bags left on the rack. Throwing in the proverbial towel was definitely in my mind at T1.

T1 was a soppy wet gong show - I left with sunscreen dripping off me and into my eyes, and felt really flustered knowing how far back I was.

I relaxed a little heading out onto the bike and it was quite enjoyable to ride the first section through town. The "hot corner" of Kuakini and Palani was piled full of spectators and was fun. The uphill section on Kuakini was a bit of a shock to my heart rate, however, so I just kept my cadence high and focused on enjoying the surroundings. 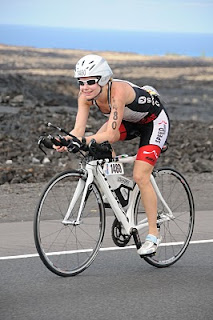 The pace noticeably increased as the riders hit the Queen K. Seeing the string of riders ahead of me on the Queen K drove home the amazing reality that I was actually competing here...oops, I said that word...."competing", not "participating". It was forseeable that my mindset would change as soon as I got on my bike and I didn't fight it too much. The first 2 hours of the ride was (controllably) fast and fun! I had some mild cramping (which I attribute to the salt water consumption on the swim), but stuck to my nutrition plan of a salt pill + gel every 45 minutes and as much GU Brew and water as I could handle.


The fast and fun bit had to end, though! The Kona bike course is famous for two things - the heat, and the wind - and Madame Pele did not disappoint on this day. By the time I reached Kawaihae, it was sweltering hot. I kept an eye on the ocean since a few riders had advised me that rough water was a sure sign of the Hawi winds. Sure enough - about halfway up the ascent to Hawi, I saw the whitecaps warning me that I had few precious moments before it was time to just hang on. I downed two gels, a salt tab and dumped the last of my GU Brew into my Speedfil, just in time for the cyclone to hit. For the next 45 minutes up to Hawi and back down the hill, the wind gusts threw me around like a piece of lettuce. It was crazy.

What should have been an enjoyable descent out of Hawi was a relentless struggle to stay focused and stay on my bike. I could see the riders in front of me getting hit with the swirling wind and paid absolute attention to what was going on in front of me, knowing that in a few seconds I would get hit by the exact same gusts of cross wind. My guess is that the gusts were 50kph+. There were a few embankments that offered some temporary relief from the cross wind - I used these to relax a bit, take sips of water and get a gel down.

After returning through Kawaihae, the dead heat of the lava struck. There was not a cloud in the sky and the heat was vicious (I was later told that the temperature had been 44 degrees Celsius in the lava fields). Around 120km, I became cognizant of pain - the nerves in my metatarsal pads were screaming ( it is a condition called "hot feet" - it feels like someone is taking a blow torch to the pads of your feet) and my forearms were pasty red with sunburn. There was nothing I could do about either. None of the aid stations had sunscreen when I asked. Spending the last 60km in the barren lava fields in the sweltering heat of the day definitely teaches you a thing or two about yourself.

When I reached the airport, my focus was on getting the last of my nutrition down, picking up my cadence and relaxing a bit - I needed those legs to run on. It was totally humbling to see the pro men leaders coming out of the energy lab as I was rolling back into town on my bike. Are you kidding me? They were almost done....and I had a full marathon to run.

T2 was painful. The sunburn on my forearms and back was searing as the volunteers gobbed on sunscreen, and the pads of my feet were not happy to be covered with compression socks. Aside from the pain I was already experiencing was the reality that it was 2:30pm and I was about to go run a marathon in the blazing sun. This would be the hardest 26.2 miles ever.

The marathon was less a run and more of a hobble from aid station to aid station. This was my survival tactic and I formed a little bit of a routine through each aid station. Grab water. Dump it on my head. Grab another water, drink it. Grab a coke, drink it. Grab as many sponges and ice as I could hold. Sometimes I even dumped cola on my face and drank the sponges. It didn't matter. The whole thing was crazy and ridiculous and hard.

On the run course, I cried. I hurt and I didn't care anymore. 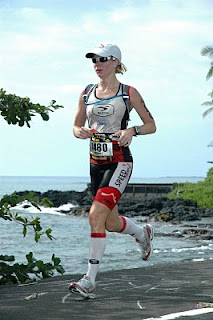 The first 16k out-and-back on Ali'i Drive was humid and tough, but in retrospect I realize that at least there were people to cheer and some nice views of the ocean. Comparatively, the final 26k out and back along the Queen K to the energy lab was a nightmarish hell. Lava, lava everywhere and nothing to look at but the long hot road stretching out ahead of you. Talk about a lesson in perseverance.

Miraculously though, somewhere along the murderous Queen K I started feeling kind of ok. Maybe it was the 28 glasses of cola or the 18 salt pills or the Tylenol gel caps or just the monotony of putting one foot in front of the other. I reached the halfway mark in 2:01 and was floored. It was painful and it was slow, but I could get this thing over with in two more hours. 8pm be damned....the motivation to finish by 6:30pm sans glow stick was huge.


Along the back half of the marathon, I started chatting to the other runners and cheering on the runners going in the opposite direction. It felt good and removed me from the pain I was feeling. We were all in this together, and there was no point in suffering alone. Some of the conversations were hilarious - one lady kept talking about all the food she wanted to eat....pizza, fries, milkshake. I had to run away from her because she was making me nauseous!!

And miraculously, the last hill up to Palani appeared. And then the glorious downhill until I reached the crowds of Ali'i Drive. Tears of joy appeared as I ran down Ali'i and at 6:31pm I crossed the finish line at the Ford Ironman World Championship. It is not a moment I will forget soon. 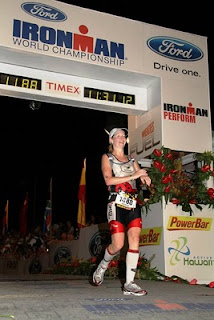 Kona is a truly humbling experience - to finish in 11:31 and be in the middle of the pack is very eye opening. Over two-thirds of the finishers come in under twelve hours. I finished 48th in my age group out of 90, but considering that I was keeping company with the world's best in my rookie year at this sport AND only six weeks after my Ironman debut and qualifying race at Ironman Canada, I am pretty happy with the result. There were some truly amazing athletes out there - the young, the old, the fit and the disabled. All amazing.
The day was very, very tough. Not only were the conditions totally extreme - heat, wind, humidity all wreaked havoc - but the course was challenging to boot. It was easily the most difficult race I have ever done and possibly the most difficult thing I have ever done period. There were many moments of reaching inside and digging in when I felt had absolutely nothing left, and I am so glad I didn't quit. 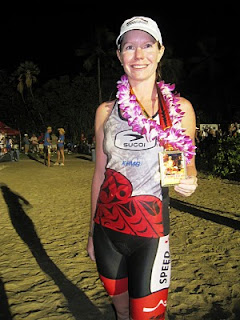