While there have been many breakthroughs in research for treatment, prevention and cure, stats say that one in three Canadians will develop cancer in their lifetime. A full one-third of us will hear those terrifying words - "You have cancer". So it was with hope of playing a small, small, infintesimal part in the monumental task of conquering cancer that I joined 2000 riders on a two-day journey from Vancouver (well, Surrey) to Seattle (actually Redmond) to raise awareness and funds for the BC Cancer Agency.

The ride itself is symbolic. There were words and themes repeated during the course of the weekend - Hope. Courage. Loss. Inspiration. The 250 kilometres covered over the course of the two days were not supposed to be easy. It was meant to be a challenge and a testament to the human spirit.
The gravity of the event struck me before I even started pedaling on Saturday morning. Arriving in Surrey at 6am on Saturday morning, there were literally thousands upon thousands of people out to show their support. Riders, survivors, volunteers, support crew, families. It was amazing to see the turnout, and even more astonishing to hear that amongst this crowd, over $9.2 million was raised. The opening ceremonies had me in tears - it was a memorial for all those who lost their battles, a celebration of life for those that had survived theirs and a call to action that future generations benefit from the funds raised.

Word of the day: EPIC.
At 7:15am, we clipped in and began our journey. I have never experienced such chaos on a bike! Utmost care was required during the first few kilometres to stay clear of other riders. It is here that I will express my only non-weather related criticism of the event - for the first 30km to the border, the lead vehicles held the riders back at a top speed of 30kph including downhill. Whatever the organizers were trying to accomplish had the opposite effect - it was a dangerous, chaotic, unsafe log-jam of riders. The faster riders had nowhere to go and as the masses swelled into the back of the lead vehicles, you were forced to swerve and ride your brakes just to stay off the crowd. Bad, bad situation. 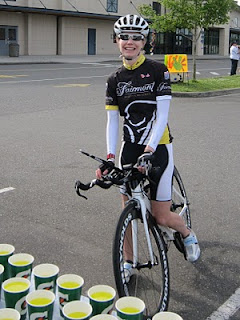 The border crossing, as a result, was total chaos but I managed to cross fairly quickly. Once clear of the pack of riders, I skipped through the first Pit Stop at Blaine Middle School and opened up along the coast. The first section -winding down along the coast- was scenic and fast. I realized that I was going a little hard, but didn't really care. It just felt good to be moving.
The weather turned out to be glorious, sunny and warm, but with a fairly substantial south headwind. I had decided to take Ora out for the ride - although she was not ideal for riding in the masses at the beginning, she was perfect for the long straight stretches through the countryside. I deliberately stayed out of the draft of the pelotons and just enjoyed being down in the aerobars. A group of about 15 riders caught me on the north side of Bellingham and I noticed that my brother-in-law Mark was part of the group, so I latched on for a short section through town, feeling that it was safer to be part of the group. After a quick break around 87km, the most challenging (but beautiful) section of road began past Padden Park and around Lake Samish, followed by a final uninspired section of straights (complete with headwind and rough pavement) into Mount Vernon. 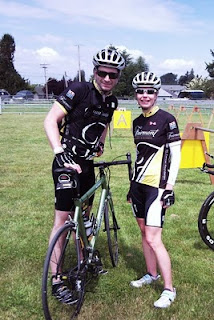 We rolled into the Mount Vernon camp around 12:30pm to find that there were only about 20 bikes racked....where was everyone?!! It was pretty cute when a couple of the volunteers and spectators took my picture because I was the first female rider across the line. However, they thought I had completely lost my marbles when I quickly changed and headed out for a short 5k brick run :) 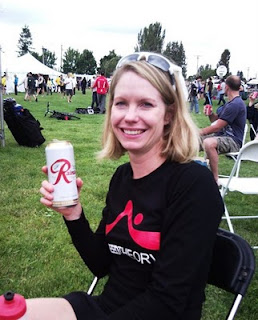 Had a great little run, then back to camp for a massage and shower. There was no wait for the massage (woo-hoo!!!) and the shower facilities totally rocked - after a warm shower, a blow dry (lux camping!!!) and some snacks, I felt recharged and ready to....um....sit around and do nothing! We spent the afternoon savoring regional delicacies....aka Rainier Beer and smokies, but honestly by around 6pm I was ready to call it a day :)
The tent city was quite something to behold. There were rows upon rows of little blue tents and the facilities in general seemed to be sufficient to hold the 2000 riders and support crew. There were never really any substantive line-ups and the services were quite adequate, although I must say that I was quite thankful that it was dry, sunny and warm.
Day 1 GPS stats:
Ride: 132.87km in 4:30:43; total time 5:16:55; Avg speed 28.7kph.
Run: 5.18km in 23:32; Pace 4:32 min/km.
Day 2: Mount Vernon to Redmond, WA - 119km

Word of the day: SOGGY.
My tentmate thankfully woke me around 5:15am. After peeling my sore back off the thermarest (I am apparently not as young as I once was....sleeping on the ground did me no favors), I quickly headed out for breakfast. I knew I needed to move quickly to avoid the crowds. Sure enough, we had just enough time to eat, pack up and get the bikes ready before the masses overran the camp. When the ride started at 7:15am there were still hundreds left in the camp lined up for breakfast and packing up.
Quite the opposite of the previous day, Day 2 brought us fog, mist and a bit of chill. Even though the headwind was gone, it was a soggy, cold ride.
Heading south towards Lake Stevens and Snohomish, the route was scenic albeit more technical than the previous day. There were a number of obstacles made worse by the marginal conditions - about a dozen railway crossings, a treacherous downhill wooden bridge and substantive mileage spent on narrow paved bike paths with regular stops for gates and turnouts. As a result, the average speed dropped quite substantially and caution was the word of the day. I saw three wipeouts first-hand, and judging from some of the bumps and bruises at the finish, suspect that there were quite a few accidents on Day 2.
At the Lake Stevens "lunch" stop (I think it was only 10:30am!), I was getting chilly and decided to skip any further breaks. I only had a thin shell and knew that if I did not keep moving that hypothermia would set in very quickly. I rode pretty much the entire way on my own - thankfully the route was extremely well-marked. The section through Snohomish was fairly hilly and it was here that I decided to take off my rain shell because the sky was brightening up and it had started to warm up. Of course, murphy's law, the deluge set in about 10 minutes later and I was forced to slog the last 30km in downpour without a rain jacket on. I knew that if I stopped I would get too cold, so just moved on as fast as the conditions would bear.....VERY eager to be finished.
I arrived at the finish line just after noon - very soggy and very happy to be finished. There were only about 15 bikes when I arrived and I felt very, very sorry for anyone who was still out in the deluge. The dreary weather unfortunately cast a little pallor on the finish line - what should have been a celebration was a dash for dry clothes and shelter!

Day 2 GPS stats:
Ride: 118.05km in 4:02:14; total time 4:39:14; Avg speed 29.2kph.
The synopsis? An extremely well-organized event and a worthy cause. My team members, sponsored by Fairmont Hotels and Maple Leaf Foods, raised $53,760 and a total of $9.2 million was raised by the BC riders.
Moreover, it was a worthwhile and inspiring experience. I rode alongside survivors, marked by their yellow flags, whose will to live was so infectious and inspiring. I also rode alongside so many who had lost loved ones - children, parents, spouses, friends - a heartwrenching reminder of why cancer research is so important.
And I wore sunscreen, even in the rain.
Posted by richelef at 7:32 PM