My first triathlon was exactly one year ago - the sprint distance at the Subaru Vancouver. I accomplished exactly three goals that day: I did not drown. I finished. I did not finish dead last...but not by much.

365 days later, on the road to Ironman Canada in August, I lined up on the very same beach for the half-iron distance. Pretty tall order for someone who purchased their first road bike 20 months ago and learned to swim front crawl 15 months ago!

Somewhere in-between I have turned into the tri-geek that I vowed I would never become - complete with funky spandex outfit, aero water bottle, carbon tri bike, elastic laces for my shoes, compression socks and a visor. And on Tuesday of this week, I completed the transformation to the dark side with my purchase of the aero-helmet. As though being an accountant were not dorky enough.

My swim is still not pretty, but it is getting more comfortable despite the rampant flailing. I am a land mammal, that is clear. However, I succeeded today in staying out of the chaos of the start, sticking to my own pace, and legging it out without incident. There was a wicked current and some interesting wave action, leading to some very high sodium intake and a little bout of seasickness. However, I made it through....albeit in a very un-outstanding 37:27. 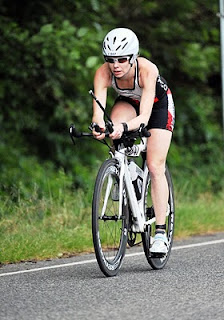 For the uninitiated, I apologize. Long distance runners and triathletes alike tend to fixate on certain topics that are somewhat less than glamorous. Nutrition and its by-products are one of such topics, and were the focus of my ride today.

After having suffered from sub-par nutrition at Oliver, my goal here was to drink every last drop of my GU Brew (which included a few scoops of extra carb for good measure), eat my gels, take my salt pills and widdle at will.

It was all good except for the widdle part. Not for lack of trying! I experienced complete mind-body dissonance between the necessity to stay hydrated and the total social unacceptability of weeing in public. So the good news is that I arrived in T2 with a clean bike. The bad news is that I wasted some time on the run trying to find a socially acceptable place to widdle.

Other than the fixation on nutrition, the bike was pretty uneventful. It was a tough course with constant undulation, some funky crosswind and no real chance to just settle in and cruise. Not surprisingly, my average speed was less than at Oliver.

The new aerohelmet was really comfortable. Not sure that it really sped me up, but damn, did I ever look like a dork :) 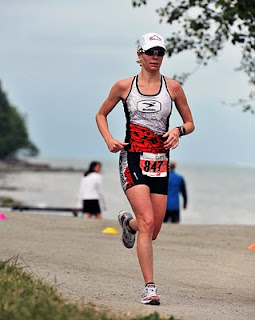 Run
Goal: Tough out the fade.

Easier said than done! For those of you cheering, I want you to know that I really, really appreciated it. The lack of cognizance or any blink of recognition was not aimed at you intentionally - my energy was completely and utterly consumed just keeping the run going.

The darkness first appeared around 6k, went away with some gel, and reappeared at 12k. It tricked me into a lot of negative thoughts and taunted me to stop. For anyone who has done an endurance event, this is familiar territory. Feel good. Feel awful. Want to quit. Feel good again.

At the final turn at Spanish Banks, I was really really excited that there were only 3k left. And then I saw Nicole charging up behind me, running the same blistering pace that she did in Oliver. The fear of being passed took over and lit a fire under my rear end....miraculously I even managed to speed up over the last 3k! 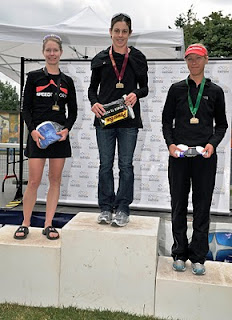 The best part was that my race effort was rewarded with a visit to the podium as 2nd place for my AG. Even though I know that the best age groupers in my category were not racing, I am still pretty proud to have been named the BC Provincial long-course AG champion for 2010!

(OK, so it's kind of like being Starbucks barista of the year when you kick all of the other coffee shops out of the competition. The title really doesn't mean anything...but it's still fun!)

All in all, I find it totally amazing that all the training is paying off. I look back to one year ago and realize that I have come a LONG way from the sprint tri last year. Knowing that a very tough month of training for IMC is coming up, it was nice to relish in the small victories of the day, even just for a few moments. Triathlons are complex, with lots of moving parts and things to master, but I am slowly learning.

Some shout outs! Great bigs hugs and thanks to.... 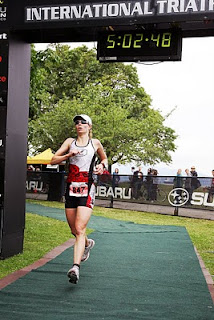