As part of the lead-up to IMC, I have signed up for two half-distance races - the Oliver half and Subaru Vancouver (in July). I had mixed feelings going to Oliver this weekend - I had not trained specifically for this race, it was just part of the comprehensive IMC training plan. At the same time, I have never trained so much in my life so by all standards was probably as ready for a half-iron as I ever would be....that is to say, assuming that one is ever really ready to swim 2k, bike 93k and then run a half marathon :)

The day before the race was not ideal pre-race prep - it felt rushed, un-relaxed and chaotic. The night before the race was even worse - I had a lot of trouble sleeping and only managed to nod off around 2am...which meant a mere 2hrs 45 of sleep before the longest distance triathlon I have ever done.

Race morning turned out perfect weather-wise. It was warm, yet overcast and although rain threatened, it never appeared. I arrived at transition around 6:15am, which gave me just over an hour to get my transition set up, change into my wetsuit and head over to the swim start. It ended up feeling a little rushed, note to self to leave more time.

Following the men's wave start at 7:30am, I took my place with the women at the edge of the lake. My experience with open water starts has been mixed and even with the amount of swimming I have done this year, I was nervous about the swim and did not want to overestimate my abilities. My plan was to find my pace and keep it nice and easy.
That plan lasted exactly 200m.
As expected, the start was a clawing, splashing mess. Totally unexpected, I was kicked HARD in the abdomen. Involuntarily, I righted myself in the water, started hyperventilating and threw up a little. Yes, I puked. How gross is that?? So much for calm. I flipped onto my back and started panicking....it was awful. Tears in my eyes, I flipped over and breaststroked through the melee, trying to get the courage up to put my face under the water.

At this point I was being passed by everyone like a lame fish in the school. I was breathing hard, heart racing and tears welled in my eyes. This was crazy. I can't swim. I can't even breathe. I was sweating in my wetsuit, making my goggles fog with tears and just wanted to get out. NOW. It took every ounce of will not to swim over to the rescue zodiac that was so conveniently located about 25m away.
A few more kicks on my back. Wait a minute, did I really work this hard to give up now? Could I salvage something out of this start? Could I calm down, put my face in the water and start moving forward again?

After rounding the 1500m buoy, I found a little more courage and picked up my pace. I was almost in. I would forget what the clock would tell me, shake it off and get on with my race. As I looked up exiting the water, the clock said 48 minutes. Subtract 10 for my wave and I was out in 38 minutes. Not good, but I had survived the swim. Wetsuit yanked off, I hobbled down the looooong transition area to my bike.

I was still a bit upset by the time I reached my bike and decided to take my time in T2. There would be no more crying today. Breathe, relax, get ready to ride.

When I started pedaling away, I immediately noticed something wrong with my rear brake. It was dragging on the rim of my tire and as hard as I pedaled, it just fought with me. Drag, drag, drag, drag. I couldn't believe it. From one thing to the next. I tried adjusting the brake, but realized that I was just going to cause an accident if I did so, so ended up pulling over at the junction of Hwy 97 and Tucelnuit Drive, about 10k into the ride. Got off the bike and adjusted the brake. Aaaaaah. Pedaling has never felt so easy as it did then. 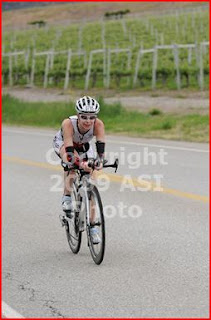 After these two upsetting setbacks, I was unamused. Instead of giving up, though, I took control. I started passing people on Tucelnuit, one after the other. Stayed in my aerobars, kept my cadence quick, and fixated on enjoying the gorgeous course along Black Sage Road. I rode consistently but not out of my comfort zone, and when I noticed that my average pace was just over 34kph, decided to keep it up. I was passing more riders than were passing me and felt great (in all, the stats tell me that I passed 116 riders on the bike). After having such an awful swim and losing so much confidence in my bike during the previous two weeks it was uplifting to feel like I was doing something well.
At the intersection of Hwy 97 my tubes ejected from the back cage when I bumped over the cattle guard. Had to get off my bike again, run down the hill, pick up the tubes, run back up the hill and get back on the bike. Damn!!! At this point, I resigned myself to the fact that the stars were simply not aligned for me. This was a training race after all, and lessons are there to be learned.

The next lesson I would learn would be about hydration. My new speedfil made it easy for me to drink on the fly, and I made sure that I ate my GU chomps and gels on regular intervals whether I felt like it or not. I thought that I was drinking lots, but to my chagrin, realized upon racking my bike that I had only drank half of my water. That meant I had a mere 500mL of fluid over 3 1/2 hours of activity.

Bike to run transition went smooth, I stopped for a quick potty stop, and headed off on the run. I knew that with so little fluid in me that I would fade fast in the heat of the day - it was probably about 18 degrees at this point - and made a concerted effort to stop at each and every water station. I made a wonderful discovery - flat cola is gooood stuff. Down went a half glass of cola and a couple sips of water at each water station. 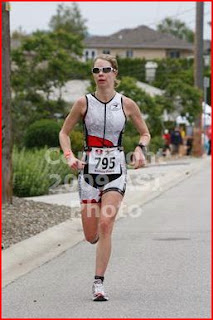 My pace for the first 10k was decent - about 4:45/km, but as I expected with the lack of hydration, fatigue quickly set in. My long-shot goal run time was 1:39, and I abandoned this quickly, instead shooting for my realistic goal run time of 1:45. It wasn't a stellar run for me - actually just plain slow in my books - but it was a consistent effort.

I had two thoughts as I crossed the finish line. Damn, that was harder than I thought. Double damn, how am I going to go TWICE that distance in less than three months?!

Not a perfect race by any standards but I finished 70.3 in one piece and am proud that I hung in there. My synopsis of the day:
1. Totally pooched the swim. Open water survival techniques need vast improvement.
2. Rocked the bike. Ora, you are a good girl. I'm sorry I swore at you last week.
3. Survived the run. I can do better than just survive.
I have two and a half-months to learn, train and learn more before IMC. Four weeks to put it to the test at the Subaru Vancouver. Wish me luck! :)

Thanks to Coach Calvin, everyone at Speed Theory and all the peeps at PSTC for getting me this far....we're having fun now right!? 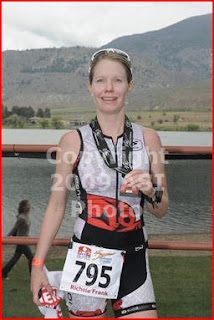