To say it has been an interesting year would be an understatement! It has been quite a wild ride and blogging a recap is bound to be somewhat anti-climactic. So here goes....(insert theme music here)....2010: A Triathlon Odyssey. 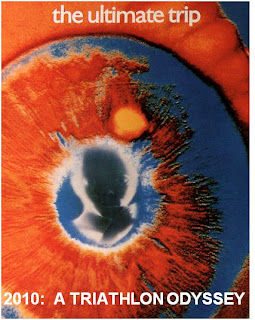 2010 was about dreaming the impossible.

I dared to believe I could finished an Ironman. And then, for good measure, I had the absolute privilege and opportunity of being able to race in Kona. It isn't about winning, it is about dreaming the impossible, working hard and making it happen. And sometimes, those dreams are possible.

2010 was about doing things I swore I was never going to do again.

After 2009, I vowed never to run four marathons in one year yet here I am reflecting on 2010, realizing that I did it again. Damn those marathons for sneaking up on me. Cross my heart, 2011 will be the year of No Mary.

After crossing the line at IMC, I also vowed never, ever to do another Ironman. And, yet, 6 weeks later I was quite acutely aware of this vow as I lined up to do it again. I guess "never" has its limitations (especially with Kona on the line), but it still never ceases to amaze me how quickly humans can compartmentalize our experiences, forget the pain and suffering and lay it all on the line again.

2010 was about finding inspiration when the going got tough.

And when I speak of inspiration, I am not talking about superheroes or Chrissie Wellington. I owe a debt of gratitude to my family and my friends - were it not for them providing equal parts support, butt kicking and patience, it just would not have been the same. To Jeanne for being real, Mom and Dad for keeping me grounded, Jared for forcing me to do hill repeats, Coach Calvin for teaching me regimen, Jeremy for showing that fearlessness is good, Shane/Dave/Steve/Andrew/Gregg for provoking me to ride harder than I thought I could (damn you!), Greg & Tav for encouraging me to believe in myself and Hoz (as only an ultramarathoner can) for opening my eyes to the fact that we can go a long, long way if we hang in there. There are so many more people I am forgetting to mention here that influenced me so positively in training and in life...thank you so much.

My GPS logs say that I ran 2,277 kilometres, rode 6,011 kilometres and swam 257 kilometres. In aggregate - 8,545 kilometres traveled on my own steam, well worth any number of Honey's donuts as reward I would think!


As 2010 fades away into the training logs and plans get drawn up for a new season, it is hard to imagine a year quite as amazing as this one has been.