I’ve had a few comments that I omitted a critical part of the story in my IMC race blog. That was intentional.

The journey to IMC deserved to be a chapter in my life on its own right - there were too many long days and too much sweat poured into that journey for it not to. And I also fully expected that the end of the story would be written on or before midnight on Sunday, August 30th.

But alas, the story continues.

With a little aloha to boot.

Those of you who know me well know of my fondness for Hawaii. Since my first vacation in Kona in 2004, I have gone back six times. I love everything about the land of Aloha - the breeze, the smell of plumeria, the crazy juxtaposition of black lava against lush rainforest, crazy hikes to hidden waterfalls and the laid-back island attitude. Oh, and maybe a Lava Flow or two….the silly tourist drink that is half pina colada, half daiquiri and totally addictive.

My athletic endeavors in Hawaii to date have been limited to a half-marathon (my first age group victory!) and some seriously humid training runs. Oh, and who could forget an ill-advised “pub” crawl in Maui (inspired and fuelled by a few too many mai tais as Linda will attest to…picture evidence below). 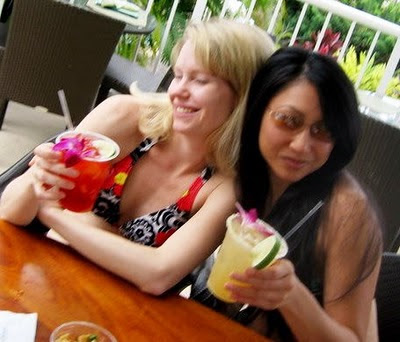 Something tells me that my next trip to Hawaii will be somewhat different…..

The big show. For a triathlete, and a rookie one at that, there is no greater honor than getting to the start line at Kona. My 10th in age group at Ironman Canada was enough to catch me a roll-down qualifying spot. At first, I hesitated in taking the slot due to my complete and utter inexperience. This will be only my 7th triathlon ever. As a novice swimmer, the open ocean non-wetsuit legal swim terrifies me, never mind the heat and the raging tradewinds on the ride and run. However, despite the adversity, I realize that this may be the opportunity of a lifetime.

I watched the 2009 IM Kona live on Universal Sports last year, from my hotel room the day before the Victoria marathon. I had just signed up for IMC. I could barely swim, had never ridden a tri bike (and had only been riding for less than 12 mos period) and was still having time wrapping my head around the distance. Just finishing IMC would easily be my biggest athletic accomplishment.

One year later, I have a bib number at Kona.

I will have the chance to swim Kailua Bay and ride the legendary Queen K to Hawi. I will get the opportunity to endure the run through the lava desert. And if I am lucky, I will cross that very famous finish line on Ali’i Drive

Not in my wildest dreams could I have imagined this.

I am nervous. Thrilled. Awestruck. Every day I expect to wake up and have someone tell me that this is all a dream….but it’s really happening, isn’t it?