Do not get your Mogwai wet

So usually this blog is about me…but yesterday I got to trade in my racing kit to be a triathlon super –fan at the Vancouver triathlon for Donovan’s debut at the Olympic distance!!

Race day could be described in one word: CRAP. It was cold, wet, rainy and miserable. I felt so badly for everyone racing, teeth chattering before the swim start.
Combined with the completely crap weather, the swim course brought along some crap of its own – the low tide forced the participants to wade and mash through much of the start and the turn, and the swim exit was a mucky and rocky mess. Brutal!
Despite the challenging conditions, Donovan totally rocked his first Oly. His swim was solid (28:35), followed by an equally solid ride (1:10:30, including T1 and T2) and a fantastic run! Finish time was 2:15:53, good for 14th place overall and a 6th place finish in an extremely competitive age group. I suspect that due to the conditions there was some conservatism exercised on the ride, but the 37:49 run time was smokin' (5th fastest of the day!).
The day did have its moments, however. For those of you familiar with the movie Gremlins, you will recall that the Mogwai came with very clear instructions: do not expose to bright light, do not get them wet and do not feed after midnight.
I have suspected for a long time that Donovan may actually be part Mogwai as he comes with very similar instructions: do not get wet and do not allow to get cold. It is also quite possible that he should not be fed after midnight.
Evidencing the hypothesis that Donovan may in fact be Mogwai, here is a picture of him starting the triathlon: 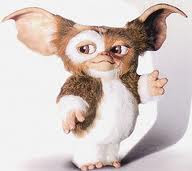 However, as a result of two hours and sixteen minutes in the cold and wet, the metamorphosis into Gremlin seemed to be unavoidable. Donovan the Gremlin emerged from the triathlon looking like this: 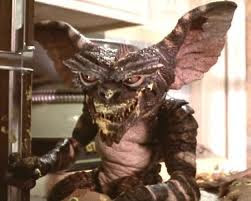 Lessons learned from the day:
1. Never get your Mogwai cold and wet. It turns into an evil Gremlin with sharp teeth and claws.
2. If you do get your Mogwai wet, steer clear of the Gremlin. Get it home as soon as possible and try to avoid being bitten.
3. Aside from successfully coping with the Gremlin, my skills as a triathlon super-fan are decidedly, um, less than super. Not only did I forget my camera, cowbell and rainjacket, but also failed to have a sign. My blackberry photos of the event qualify as the worst photos ever taken. Epic fail noted - I promise to improve and will train hard for future super-fan events.
Posted by richelef at 10:35 AM