Four years ago, I hosted a Canada Day BBQ during which Bogey decided he had had enough and ran away.  When I realized he was gone, I was distraught.  My best friend was missing.

Four hours later, a lovely woman contacted Vancouver animal control to say that she had found my Bogey wandering a few blocks from my house.  I ran down the block, breathless, to meet her...and cried when I saw her standing there with my wonderful little companion.  I was so very, very thankful that day for the kindness of a stranger, and so grateful to be reunited with my best friend.

And yesterday, I was fortunate to have the opportunity to pay it forward.

A couple friends and I were riding along Marine Drive in West Van when we passed a rather frantic Bernese mountain dog running in the opposite direction, in traffic.  The poor dog was dodging cars and cyclists, and obviously terrified.

I didn't even think before turning my bike to chase after the dog.  My heart could never forgive me had it been injured by a car...the what-ifs were too much to bear.

The three of us were able to catch the collarless Bernese, not without a little effort, after abandoning our bikes and running up a steep driveway along Marine Drive.  Honestly, we must have looked like ten kinds of crazy...three lycra-clad cyclists chasing this poor dog!  The owners of the house were kind enough to bring down some water and a makeshift-ribbon collar while we called the SPCA.  West Van bylaw services wasn't picking up the phone (shame on you!), and since the SPCA was not able to come pick up the dog, we resorting to calling North Shore Taxi (listening to my friend explain that we needed a van to transport three cyclists and a lost Bernese to the SPCA was priceless!).

Fortuitously, bylaw enforcement happened to drive by about fifteen minutes later before the cab arrived and was able to take the dog to the SPCA.

Twenty minutes later, the lovely Bernese was safely at the SPCA and they called to inform me that the dog was microchipped.

When I arrived home, the SPCA called again to tell me that the dog and her owner were reunited.  My heart was full.  The owner asked to speak to me, and I told her that a kind stranger had returned my best friend four years ago, ironically, to the very day.  It was the least I could do.

To my tolerant, animal-loving friends who selflessly joined in the adventure....thank you.  You have good hearts.

To Mishka, the Bernese, I am overjoyed that you found your people!

And my best friend Bogey....well, he got lots of treats and hugs, and a trip to the beach!  :) 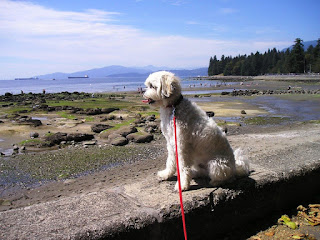