Ah, St. Croix 70.3.  You are so beautiful, yet as beauties tend to be, you are a difficult and stubbornly relentless.

The abbreviated version of my race experience goes something like this:  Showed the Beast who’s boss.  Survived the (arguably) hardest 70.3 around.  Have the medal to prove it.  Saw Lance.  Enjoyed the run.  4th in AG, 9th amateur.

Triathlon in St. Croix has a long history.  The race has been around, in some form, for 24 years and my guess is that the notoriety of the course, the engagement of the community and an enthusiastic race director are all reasons for its continued success.

I knew in advance that this would not be a fast race - in fact, just the opposite.   On Saturday morning, we checked out most of the course (in absolutely perfect conditions) and I understood why historically the AG race results are quite slow.  The course is visually stunning, but also strikingly difficult – in fact, nothing about St. Croix is easy.  No wetsuit open ocean swim, hills, heat, humidity all add up to one seriously tough half iron, and a great practice race for Kona.

I was cautiously optimistic.  I have been nursing a foot injury and knew in advance that my run would be sub-optimal, so my focus was on being consistent with my nutrition, getting some heat racing experience and enjoying the day.  Because the course is so difficult, there was absolutely no pressure in terms of setting a PB.

On Sunday morning, however, we woke to heavy rain.  Sigh.  After a long, rainy winter in Vancouver, I was relishing the thought of enjoying the tropical splendor.  It was not to be.  As daylight broke over downtown Christensted, it was gloomy and grey.  While the downtown area was spared the worst of the torrential downpour as we set up in transition, there were ominous clouds in all directions.

At 6am, we jumped off the dock to swim about 200m to a small sandy cay in the middle of the harbor.   Those nice calm turquoise seas we observed the day before?  Nada.  Although the Caribbean Sea was warm, the harbor was murky, dark and full of debris.  The wind was also starting to kick up a little, so there was a bit of chop in the unprotected section off the cay.
At 6:30, the wave starts got underway with the Pro Men.  There was a lot of commotion with Lance Armstrong in the field, and many of the age-groupers jockeyed around trying to watch the beach start.

W35-39 was the second last AG off the beach about 25 minutes later, and it had gotten quite cold waiting on the shore.  Nervousness or cold air, I cannot be sure.  The beach start was exceptionally violent and the normal open water jousting continued for several hundred meters as we rounded the buoy line out to the open sea.  (My experience has been that women are particularly nasty in open water swims, and this view was reinforced!)   Despite the nastiness, I forced myself to stay with the nasty kicking and hitting group of green caps because I really wanted a draft through the current.

Although the current felt strong against us during the swim, my little group of thrashing green-caps quickly caught the back of the age-groupers in front.  Unfortunately, shortly before the first turn someone kicked loose the garmin strap on my wrist and I had to flip over to tighten it back up, losing my draft.  This is one of my big issues with the 70.3 age group starts – if you are unfortunate to draw a start at the back and you lose your draft pack, it is a total mess to get through.  What was already a challenging and slow swim was made frustrating by having to weave around everyone on the last corner and into transition.  Slow swim time, 17th in my AG.

It was steadily raining when I exited the water, and the grassy transition area was a mucky mosh pit.  I jammed my muddy feet into my shoes and slipped along the grass to the bike exit. Learning how to mount with shoes attached is definitely on the to-do list - it would have really come in handy!

Under optimal conditions I would describe the bike course as challenging and technical.  On Sunday, it was nothing short of treacherous.  Although the officials swept the course the day before, it rained heavily (read: poured) Saturday afternoon and early Sunday morning and the ensuing flood covered the roads with a nice slick coating of washout, debris and gravel.  Oh, and squished toads.  Blech!!   In places, there were deep puddles covering large sections of the road (and masking some nasty potholes).   With limited visibility due to the rain, dirt and humidity, I jammed my sunglasses into my back pocket and took on the slippery roads with an overabundance of caution.  The road surface in St. Croix is a little “challenged” at the best of times, but with the added weather-related obstacles there were people flatting all over the place.  It was one scary ride! (btw – if you think I’m telling a big Caribbean fish tale, look no further than the Ironman.com post-race reports!  Crashes, flats and road rash were the fashion of the day).

Like the end of the swim, the beginning of the ride was a total traffic jam and it was necessary to pass a continuous line of riders (I was passed by only one woman on the ride).  It made for extra fun that most of us are accustomed to riding on the right….switching it up and riding on the left was pretty strange, and there were a lot of people blocking the right hand pass.  I resorted to passing as safely as I could, sometimes right, sometimes left, whatever I could to stay out of harms way.

I reached the Beast in around an hour and dropped into my 27 for the tough ¾ mile climb, which has grades of up to 25 percent.  Not only is it steep, but the pavement is extremely rough and there were people struggling all over it.  I kept my head down and focused on not getting knocked off my bike, choosing the easiest line up the steep switchbacks (in some sections, the “inside” corner was 25 percent grade whereas the outside line was 18 percent or less).  By the time I reached the top, the only people around me had dismounted and were walking up the hill.  There was even a sag wagon at the top collecting dejected riders beaten by the Beast!

After cresting the Beast, I saw very few other riders for the remainder of the ride.  Although getting to the top was a relief, the Beast is really just the beginning of the race – the rollers that follow are relentless and the headwind comes out to make your legs feel really heavy.  We were lucky in the sense that the wind was relatively low, but the slick conditions demanded diligence.  Even on the backside of the course, there are four or five steep hills and the last 15 miles were extremely challenging and technical.  Normally I like drop the intensity and spin into transition, but it was not going to happen here.

Very much like IM Cozumel, the entire community gets behind the race and it was welcoming to have friendly faces and cheering crowds on the bike course.  We were cheered along at every aid station by enthusiastic volunteers (and lots of kids!).  You cannot help but smile when you hear "Yo lady, you be riding fast!" during the hardest moments :)  Even the police officers (who did an excellent job keeping the course traffic-free) were quick to jump in with encouragement, although they had their hands full with a great number of crashes.  I was very relieved to get into transition without incident.

I left T2 feeling a lot like Pig Pen from Charlie Brown – coated in mud from head to toe!  A few glasses of water over the head made for an impromptu shower, and the fun started (I always really like getting off the bike and onto the run...relying on only my two feet is so good!).  At this point, the sky was a little overcast but it felt extremely hot and humid.  My run plan was simple – to focus how my bum foot was doing and run accordingly.  No point in doing more damage.  This approach turned into 3 miles of running followed by 10 and 1’s, but even so, I had a lot of fun with the amazing volunteers and cheering on my teammates (racing, after all, is much more fun when you are smiling and happy!).  I even started asking for rum punch at the aid stations…which to my chagrin, they had none of. J  The two loop course traversed the grounds of the Buccaneer hotel, including a seaside gravel trail around the golf course - it was not easy, especially with the humidity, but the stunning ocean views and incredible crowd support made it a pleasure.  My favorite part was the steel drum band playing on the beach as we ran past! 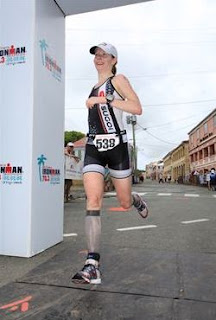 On the second loop, the course adds a final kilometer through the “hot corner” in town.  I was so very appreciative that we did not have to run 20k through the streets of Christensted!  The air was still, humid and stifling and the last uphill section on the uneven pavement was hard work.  But, a quick turn later, and a few blocks back to the seaside transition and I was home!  I felt fantastic – my foot had held me back enough to finish the run feeling like I could keep going (which, after all, is the real goal) so it was a win to me, even though I only finished 4th in my AG and had a “personal worst” time.

St. Croix lived up to its reputation as a tough, must-do destination race experience despite the very Vancouver-like weather at the beginning.  It was a little disappointing not to experience the course in its full, sunny Caribbean splendor, but it still delivered and I will be back! J


Congrats to my teammates Geoff, Christina, Elliott and Stephanie for gutting it out in challenging conditions, and thanks to Coach Bjoern for supporting us all.  Also, big thanks to Speed Theory as always for ensuring that Miss Daisy rode spectacularly in those tough conditions!