I've always found it amusing that Vancouver hosts the "Sun Run" of all things. Raincity, living up to its nickname, does not really offer up that many sunny spring days...typically we get more rain than rays chucked at us. Mind you, if organizers called it the "Slog your butt through 10k in the Rain", it probably wouldn't be the 2nd largest timed 10k road race in the world - I think only Bolder Boulder is bigger.

Speaking of which...Bolder Boulder is a great name for a race. It's really too bad that not much rhymes with Vancouver, apart from the obvious possibility of Manoeuvre Vancouver!? However, that does seem to be a fitting name if you were one of the 40,000 odd-participants crushed today into the start line on Georgia, doesn't it? :) 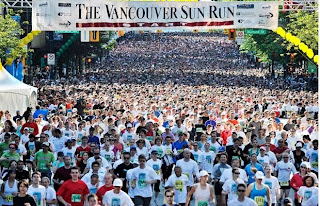 Notwithstanding my amusement at the ironic name, mother nature decided to fully cooperate and turned in a glorious, sunny day for Sun Run 2010. With fresh sunburns and tired legs from a 130k ride yesterday, I was not feeling terribly energetic as I herded myself into the starting corral with the masses. However, it was hard not to enjoy the carnival-like atmosphere and the fantastic sunshine. Race organizers could not have ordered up a more perfect day!
[Note to reader: I will preface the rest of this race report by stating upfront that I am a terrible 10k runner. "Wasted potential" would be a good description. The incremental pain and suffering that goes along with increasing my speed even for 3/4 of an hour is so awful....give me a half-marathon any day of the week. My rationale is that I simply lack that top gear that good 10k runners seem to possess at 9k when they start whizzing past me. I just have two speeds. Starting speed and everything after!]
The mass start was complete and utter chaos. Some observations about being packed like a sardine in the starting corral and for much of the first 2k of the race:

OK. Enough about that.
The best part of today, other than the sunshine, was that I completely stuck to my race plan. Seeing as I did not actually have a race plan, this was very easy to do and meant that things went very well indeed!
Fought the crowd most of the first 2k and just tried to keep as straight a line as possible. First 2k were just under 8:00, then dropped the pace to 4:15/km and kept moving along. The zeal of the crowd definitely diminished by the time we rounded into English Bay...those who should not have been in the starting corral were falling apart and by the time we reached Pacific, the crowd had thinned and I had lots of space to work with. It was nice to see some friendly faces cheering in this section!
It was warm, hot even, but I did notice a bit of a headwind as we started winding east. The nasty little uphill section up Hornby really sucked the wind out of me - my pace noticeably slowed here, heartrate shot up and a little nausea crept in. I held it together, somehow, knowing that the lovely downhill of the Burrard bridge was just in front of me, and picked it up on the way back down. I was halfway around 21 minutes, but knew the second half would be slower.
From 6k through 9k was maintenance - probably could have pushed a little harder, but just got into a comfort zone. I was pretty consistently passing people throughout the section on 6th Avenue and felt pretty decent. No need to bring back the nausea :)
Tried to pick it up at 9k over the Cambie, but as noted earlier, I just don't seem to possess that overdrive gear that so many other runners have. I felt like I was pushing, my legs and lungs were burning....yet runners were whizzing past me! The whizzing runners seemed to be predominately male - only one female runner passed me on Cambie so maybe this overdrive gear is a boy thing??
End result: a 27 second PR and a solid finish for some very tired bike legs. And to think that I need to put it all together in one day in just a week's time...yikes!
Oh, and if anyone wants to help me lobby for the name change...just let me know :)
The stats for Manoeuvre Vancouver 2010:
Finish time: 43:04
Overall: 746/39,855
Female: 93 /22,311 (broke the top 100 women! Yay for slow-ass me!)
Age group: 12 / 2,133
Posted by richelef at 9:11 PM